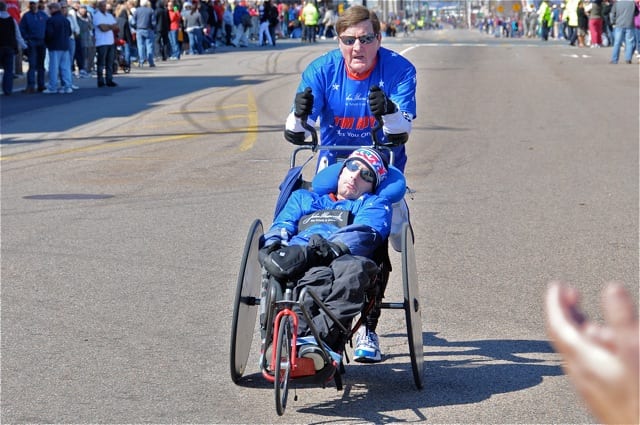 Dick Hoyt knows a thing or two about setting and achieving goals. Over the past 40 years, he has competed in:

Pretty impressive. But, it gets even better.

Now, imagine doing all of those things while pushing, pulling, or carrying another full-grown man. Dick Hoyt, who is currently 78 years old, has done just that as he has completed all of these races with his son, Rick.

When Rick was born in 1962, complications involving oxygen deprivation to his brain resulted in his diagnosis as a spastic quadriplegic with cerebral palsy. (You can read the full story here.) In 1977, after Rick wanted to participate in a 5-mile benefit run for a Lacrosse player who had been paralyzed, his father (who was not a runner at that point) managed to push him the entire way to finish next to last. Later, Rick told his father, “Dad, when I’m running, it feels like I’m not handicapped.” He had found something that made his son come alive. And so, Team Hoyt was born.

Together, they have gone on to collect a lifetime of incredible memories, and have inspired others to overcome their obstacles and dream big.

It Comes Down to Goals

None of the things this father/son team has achieved would have been possible had they not set big goals for themselves. (Let’s be honest. How many of us could finish any one of those races alone…much less the way they did?!) And none of those goals could have become reality without clear plans and the determination to do them.

You and I may be running different kinds of races in our businesses and personal lives, but we are a lot like Team Hoyt. If we want to experience all that life has to offer and achieve things that don’t even seem possible at the moment, we need to be able to set goals and follow through. And without clearly defined goals, we are often at the mercy of our circumstances…ending up wherever the wind blows us.

To Win at Your Goals, Get SMART

Goals that look like New Year’s Resolutions are destined to fail before you even start. So how can you do it differently? How can you set goals that can actually end in a win? Financial guru, Dave Ramsey, says, “a goal without a plan is just a dream,” so he uses a smart way to set goals. Conveniently enough, it is: S.M.A.R.T.

Goals that get done are:

Achievable – “I want to get back down to my birth weight” is probably not realistic (or healthy). “I want to be a unicorn” is a goal that needs professional help. But, in our example above, 24 pounds is attainable. People might have thought Team Hoyt’s goals weren’t achievable, but people have been running long distances for thousands of years. Most anything can be done. It’s a matter of figuring out how and then making the choices and sacrifices required to achieve the goal.

Relevant – It has to be your goal. No one ever did anything meaningful just because someone else wanted them to. Someone might have given you the idea, but you have to own it if you really want to achieve it. Rick Hoyt was the one who wanted to run, but his dad had to love his son deeply enough and be all in himself to do what they did.

Time-sensitive – Set a deadline. “I want to lose 24 pounds by Christmas.” That way—as in any good race—you have a finish line to reach for. And you can then back up from there to figure out how many pounds (or whatever) per week/month/quarter that would be to meet your deadline on time, creating lots of little successes along the way.

Rick Hoyt needed his dad in order to be able to do what he wanted. And it’s a safe bet to say that his dad would not have done all that he did without Rick.

In reaching our goals, we can all benefit from the help of others. It might be someone actually doing a task beside you, or it might be moral support from a distance. Or it might be more “virtual mentoring” through some great goal-setting resources like these:

So there you have it. What goals do you need to tackle? Take the steps today to get going on them! If Team Hoyt can finish thousands of races and realize the joy of extraordinary lives in the face of incredible odds, there are no excuses for any of the rest of us.

Oh, and just to rub it in…in 1992, Dick and Rick Hoyt biked and ran across the USA, covering 3,735 miles in 45 consecutive days. Because it was there…and it seemed like a good goal.