Joshua Chamberlain is quite possibly the one man responsible for the U.S. winning WWII. This is impressive considering that he fought in the Civil War.

Chamberlain was a college professor in Maine who volunteered to join the Union Army during the Civil War. He is best known for a single moment of action at the Battle of Gettysburg that—many believe—changed the course of history.

Confederate soldiers were attacking Chamberlain and his men who were defending a hill known as “Little Round Top.” After an entire day of repelling attack after attack, most of Chamberlain’s men were either dead or wounded. Those that were left were exhausted and out of ammunition.

Realizing that his options were running low, and understanding the importance of not losing this hilltop (and, as a result, the entire battle), Chamberlain stood in front of his men and did the one thing he could.

Now what does this have to do with WWII?

Imagine with me for a minute. What if Chamberlain hadn’t charged? What if he had accepted defeat? It would have been honorable enough. After all, they had given everything they had and were way outnumbered.

Historians generally agree that Gettysburg was a pivotal battle of the Civil War. So, what if the Confederates had won that day and gone on to win the entire war?

Our nation in modern times would look a lot different. We would have most likely divided and become several smaller countries…looking a lot like Europe. And under those circumstances, it is extremely unlikely that we would have had the unity and industrial strength in place necessary for the Greatest Generation to repel Hitler and his seemingly unstoppable evil.

What does this have to do with you?

Single moments of action can change the entire trajectory of things much bigger than the moment.

Over the past several weeks, we have been introducing a shift we have made to a “Profit First” approach to accounting (to the point that Patrick Accounting is now a firm of certified Profit First Professionals).

Here are the posts so far in this series:

So now you’re at a small business crossroads. An opportunity for action is in front of you. You can either choose to keep doing the same old, same old when it comes to your finances…if you enjoy stress and frustration. Or you can go in a different direction that has been proven by over 30,000 companies to guarantee profitability, eliminate debt, and provide real peace of mind.

If you’re ready to implement Profit First for your small business, here are three action steps you can take today to set your new future in motion:

No series of blog posts can really take the place of Mike’s book. You can get the Amazons to send one to you by clicking here.

(While you’re waiting for it to arrive, you can read the first two chapters for free here.)

Five separate bank accounts are a key part of the plan that you’ll need no matter how you tweak the rest for your individual business. So go ahead and get that taken care of.

Mike recommends having some at your current bank and some at another. For more details on how to set these up, check out this article from Mike.

3. Partner with a coach

Operating a successful small business is a marathon, not a sprint. And when you have a team around you that is focused on helping you win, you stand a much better chance of breaking the tape and putting another sticker on the window of your car.

Patrick Accounting has recently become a certified Profit First Professionals firm, which means that we are perfectly positioned to partner with you to help your profits grow. We have years of experience understanding accounting and the unique struggles of small businesses. And now we can apply all of that to implementing a proven Profit First strategy for you.

So, what do you have to lose? (How about stress, uncertainty, and frustration?!)

Download your free Profit First chapters, then contact us. It could be the one action step that changes the course of your entire future! 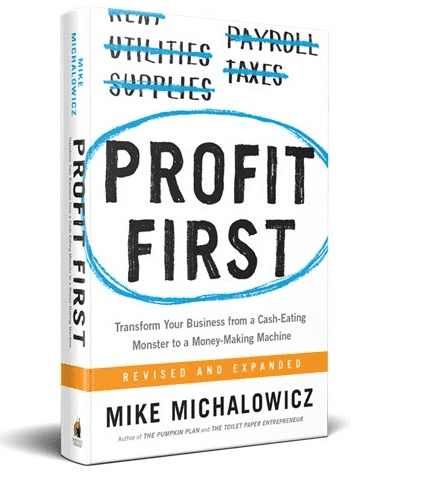 Make your profit a priority. Download the Profit First core chapters for free.